Join us for the First Annual Creative Writing Expo!

Do you dream of seeing your writing appear in print one day?

Would you like to learn more about the one and only Creative Writing Certificate offered by Central Carolina Community College?

If so, please join us on November 14!

The Expo is free and open to the public. Pre-registration is not required, but we encourage you to RSVP by calling the Continuing Education Office at 919-545-8044.

“A true piece of writing is a dangerous thing; it can change your life.” – Tobias Wolff

ting short stories? How about creative nonfiction or true-life essays? And let’s not forget about the third leg of this literary stool — poetry! Are you ready to submit your work?

No matter what you’re writing, revising or preparing to submit, you’re bound to find a local special event that may help you in your creative endeavors, from readings to classes, talks, and more! And some events are free! By attending, you’ll also meet other like-minded writers who can help you in your journey. Writing is by nature a solitary act, but it doesn’t have to be a lonely one.

As a special note, in addition to teaching a class at Central Carolina Community College this fall, I’m also honored to be presenting two workshops at Charlotte Center for Literary Arts, Inc. later this fall and in January. I look forward to working with and meeting writers in the Charlotte metro area.

Hope to see you at one of these events. In the meantime, keep writing and delighting!

Summer is here. No question. The dog days of August arrived early this year. Trust me. With two canines lying flat on their sides on the cool concrete of the porch, too enervated to even wag their tails at me, I know it’s true.

I can’t complain too much. After all, July is my birthday month (the 6th!) AND our anniversary month (the 7th!) and…. the month of berries and freestone peaches. Hurray! July also brings back that cherished, although awkward, memory of the lunar eclipse of 1982. Anybody else remember that? I boiled down that long-ago experience into an ultrashort flash essay that Mental Papercuts just kindly published in their Issue 1.5, Weird Summer Vibes. If you’re hankering for wildly creative, off-the-wall summer stories that may bring back memories of your own, please check it out.

Three poems of mine also appeared today, more writing inspired by the summer. “What the Weeds in My Yard Taught Me About Social Justice” and “September Raspberry” bloomed in the Summer 2019 issue of Gyroscope Review. And “Pulling Up the Wild Blackberry Bushes” just unfurled in the July issues of the gorgeous O.Henry and Pinestraw magazines, both of which are distributed in locations across the state.

As a reminder to all my writer friends, July also marks the halfway point for what we hope will be a productive year of writing. Now’s the time to start penning, gulp, other seasonal pieces (think: Halloween and Christmas) and most importantly, setting goals to improve.

Chinese fortune cookies are fun, not always prescient, but they can be surprisingly profound. Here’s one just for you. Of all our human resources, the most precious is our desire to improve.

So what are you doing to get better? For me, it means leading two workshops this summer at The Joyful Jewel because I learn as much, if not more, from my fellow workshop participants as they do from me! It also means taking a memoir class led by Dorit Sasson through Women on Writing, my favorite space for online writing classes.

I’m a little nervous because I’m new to the field of memoir (and a beginner in the world of creative nonfiction) but the good news is that I’ve got lots to learn. This means I’ll never be bored!

Stay cool, eat your berries, and set your own improvement goals! 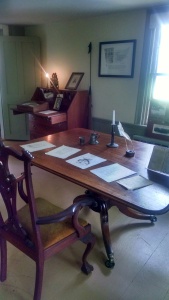 Melville wrote from a bedroom in his Arrowhead home in Pittsfield, MA.

Where do you write? It’s a question that emerges frequently among writers. Next to the imagination, our own personal space is often the most sacred thing we have.

And the answer varies tremendously. Like Herman Melville, Flannery O’Connor wrote from a desk in her bedroom. And although the Mount included a sumptuous library, Edith Wharton wrote from bed, with her little dogs curled up at her feet!

The ultimate introvert, Nathaniel Hawthorne, wrote standing up from a podium in front of a blank wall, eschewing the distractions of the outside world. And although Carl Sandburg’s family ceded a front room with an expansive window to him at Connemara, he, too, preferred a smaller interior room at a desk turned away from the window.

As for me, I have tried numerous locations, including a little study in the front of the house, surrounded by the books of my favorite authors. As you can see from the picture below, however, Huckleberry Finn quickly appropriated this space for his own watch tower. And in spite of his literary name, he and I have very different job descriptions. 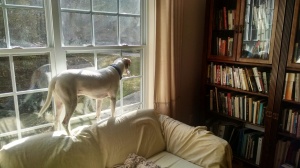 dog/dôɡ/: a domesticated carnivorous mammal that typically has a long snout, an acute sense of smell, and a barking, howling, or whining voice. It is widely kept as a pet or for work or field sports, unless that work includes writing.

writer/rahy-ter: 1. a person engaged in writing books, articles, stories, etc., especially as an occupation or profession; an author or journalist. 2) Unlike you are Edith Wharton, a writer’s work space rarely includes a dog.

The same barking and whining that makes our dogs so charming does often, regrettably, interfere with the reflection needed to write. In spite of this fact, many a writer owned a dog (Dickinson, Lord Byron, and Wharton, to name just a few) and these canine friends enrich our lives tremendously. But that is the subject of another post, I am sure.

As for me, I prefer to write at our kitchen table overlooking a north window. Being a bit of a literary hoarder, I find it useful to have plenty of space to spread out notes, reference books, index cards, and the like. I write primarily from my laptop, and I appreciate the occasional glance at the natural world, and the little dark-eyed junco skittering across the fall leaves.

From where I’m sitting, I can hear the comforting hum of the dishwasher or clothes dryer, which reminds me that the “other” work of the day is nearly done. And of course, because writing requires much brain power and therefore frequent sustenance, being close to the pantry is always a good thing.

In addition to having a semi-permanent writing space, I also carry a little notebook wherever I go so that I can scribble notes as the spirit moves me. I’m currently consolidating all of these notebooks, cards, etc., into one bigger notebook so that I can more easily draw connections among assorted scribblings.

What about you? Where do you write? 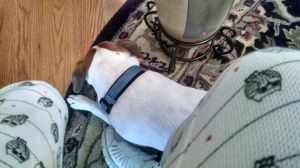 Despite our different job descriptions, we always manage to end up in the same space, however.

As promised, I’m following up with the final great book on my summer reading list. 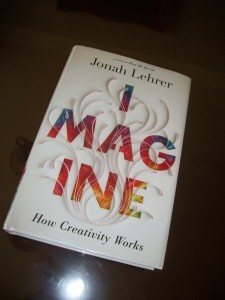 Ever wondered what goes on in the right side of your brain? If so, you must read Imagine by Rhodes Scholar Jonah Lehrer. If you’ve ever thought that creativity was held hostage by the gods, this book is for you. By breaking down the long-held mystery of creativity, Lehrer shows us that this power is within the reach of everyone.

He also shows that cultivating creativity takes work (and frequently, collaboration), but the examples he provides (from the invention of the Swiffer Wetjet to the songs of Bob Dylan) are compelling and inspirational.

Stumped? Take a warm shower or take your dog for a walk. Lehrer convincingly argues that taking a break from the issues that are puzzling you gives you the opportunity to let your right hemisphere do the heavy lifting, and presto, you may just hit upon a solution.

This book was a gift from Tonya, my childhood friend-muse-fellow artist. It was so good that she didn’t just pass along her own book; she saved her own copy for herself and bought me my own (bless her.) Although this book is filled with literary examples, this book isn’t just for writers. It’s for anyone who needs a fresh look at life. And the great news is that the secrets to life and the dilemmas that puzzle us all might just be in our heads!

Whenever I hold readings of Naked and Hungry, it never fails. Someone always asks me just where I found the name “Bermadean,” which is the name of an African pygmy goat in my book. Believe it or not, I always say, I let my fingers do the walking.

Desperate for a name for the goat, I happened upon on old phone book. As soon as I saw the name “Bermadean” my search was over. I can’t speak for the inadvertent donor, but for me the name conjured up the perfect touch of  Southern quirkiness. Done!

It goes without saying that the fiction writer shouldn’t lift both first and last names from a single person but you can cobble together some rather memorable combinations. Try pairing a first name such as Maxine with a last name such as Brown or Thomas. Need something more exotic? Change the spelling to Maxzine and add a last name such as Thorvelder or Fortenberry and you suddenly have a completely different character on your hands.

The phone book is also a great source of inspiration for story ideas in general. What do you imagine a woman who spells her first name Maxzine is like? I see an officious receptionist who insists that everyone signs in before being helped. What do you think? And what does a man with a last name of Bobo endure? How many schoolyard bullies did he encounter? And what is a family like who lives on Running Cedar Drive? I see them going in separate directions from the moment they wake up.

Drawing upon the tradition of Flannery O’Connor and Charles Dickens, you can also use last names to plant clues. What would the last name of Brickhouse imply? Someone who is solid and perhaps a bit staid. How about Fairweather? Friendly but changeable. For me, the name Scattergood conjures up the image of a disorganized do-gooder, perhaps known for random acts of compassion.

It can also be fun to use irony. Imagine that someone named Maryann Bakewell is a terrible cook. What if she can’t even make a sandwich? What if a family who is forced to sell their farm and move to the city ends up in a neighborhood called Meadowcroft? And what if a love-starved spinster has lived all her life on Amoretto Way?

Not only does the phone book offer a handy resource for a writer, I find it to be very entertaining. My own is dog-eared with notes and flags, just waiting to breathe life into my latest work. Let your fingers do the walking and you’ll see that the phone book is an instant cure for writer’s block. And the best part? It’s perfectly free.

Fans of Bermadean will be glad to know she reappears in my sequel, Born Again, Dead Again, which is coming to a bookstore near you in September 2013.