The eldest girl, Sally, had been an easy victory. When Deirdre caught sight of the Bible in her tote bag, right as Sally was leaving the IGA, she invited her to Youth Night at Revival that very same evening. “I’ve got two younger sisters,” said Sally. “Is it okay if they come too?”

Of course it was. But as soon as Deirdre met the middle girl, Anne Marie, who at 15 had a savage self-confidence and rather mature beauty, she knew she would bring trouble.

She behaved herself during the service, even the prayers, Deirdre observed, peeping through the steeple of her fingers. But who knew what she was thinking?

At the end of the night, instead of walking home with her family, Anne Marie immediately sidled up to Doodle Hayes, a farmer’s son with a tendency to hunch his fingers into the pockets of his jeans and teeter on his heels whenever Deirdre spoke to him. And now he teetered next to Anne Marie.

What fun you can have from photographs, especially when you have no idea who the people are or where they’re from! This gives you the freedom to truly imagine, and conjure an original plot from the simplest of details. And because it’s flash fiction, you have to keep it short, less than 750 words, which helps you pare it down to the absolute essentials. I actually wrote 364 words in my first draft and ended up cutting it in half. Honestly, I think it’s better now!

For even more fun, stay tuned for more prompts, and of course, more details on future workshops I’ll be leading at Central Carolina Community College in Pittsboro in Fall 2018.

By some trick of doggie geneaology, I missed being born a Dalmation, the breed who rides on a proper fire truck.  I’ve got a different gig.  When that man with the sunglasses yells “Atten-hut”, I half-sit half-stand on my mixed breed hind legs.

When my tongue lolled out, my mother used to say that now my face was going to stay like that for the rest of my life.  But I’ve just run clear across the parade grounds to sneak into this photo opportunity, so naturally, I’m panting.  This is the the United States Air Force, you know, and these are my guys.  They just finished washing the bivouac, the tires shine like their newly polished shoes.

Hixon, Hershey, Cyril and Donald keep the trucks running on this base.  The Corps doesn’t pay much, but they earn enough to buy me a decent collar and to keep food in my bowl.  They found me covered with mud in a ditch.  And they don’t never mind that I speak German.

Editor’s Note: Leave it to Mary to write from the point of view of the dog! Her love of dogs rules (she owns 2 rescue angels herself) as well as her sense of humor. What seals the deal for the reader is the title. His German name makes perfect sense when you read the last line of the story. Such a little touch results in a big payoff for the reader. Woof-woof! 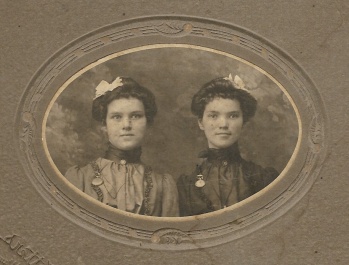 From the shoulders up we are nearly the same, our corseted torsos in similar stiff poses. Your glossy brown hair is arranged in the same pouffy waves of fat rolls as mine. Those little girl bows, made from Momma’s scraps of white satin, forever perched on top; yours on the left, mine always on the right, as if our heads were presents to be opened. Our small gold lapel watches came from Mason’s on the square, Daddy’s gift to all his girls when they turned sixteen. They shine a bit in the old photograph, the only light on those dark, heavy dresses, holding time still.

Our eyes look the same of course; generations of Jackson women reﬂected in that sideways glance, left brows slightly raised, as if always asking. Same noses, familiar cheekbones but a subtle difference, perhaps, hinted at around our mouths. We were so close, this worn picture says, the best of friends, two serenely smiling, secret sharing, sepia sisters.

Locked in two dimensions, only I know what lived below the spotted grey paper frame’s oval window; your sharp little ﬁngers, curled in a claw, pinching my compliant arm.

Editor’s Note: Masterful. Though the title of this piece is “1,000 words,” a play on the old expression about a photograph being worth 1,000 words, the author succinctly captured the essence of this image in just 212! Make note of the ending. Here her imagination truly soared as she projected “beyond the photograph” and delivered conflict and tension, so essential to effective flash. Bravo!

Stay tuned for more exciting stories from our March 3rd flash fiction class at Central Carolina Community College. I’ll post these regularly. And let your own mind wander a bit. Dream. Imagine how this one-of-a-kind Creative Writing Program can help your own imagination take flight.

Yesterday, Sunday, April 26, I had the honor of reading a poem at the 4th Annual Vision & Voice Poetry Project at the Joyful Jewel in Pittsboro, a local art gallery specializing in original arts and crafts. Once every year, they open their doors to local poets who, in the style of poetry known as Ekphrasis, write a poem inspired by a piece of art. I chose as my inspiration the beautiful photograph of a snowy egret by Gerald Dukes (kindly held by local artist. D.G. Chandler). If you like, you may read my poem here.

A number of other local poets read, including Mary Barnard, Judith Fisher, Tim Keim, Judith Stanton, Patty Cole and Judy Hogan, who emceed the event. In addition to Mariah, we took our inspiration from a bevy of talented artists including D.G. Chandler, Jerry Fowler, Orlan Johnson, Jacquelyn Lowry, Kate Ladd, Marilyn Penrod, Stacy Lewis, Sharon Blessum, Gerald Dukes, just to name a few. Our subjects of inspiration ranged from the expected (paintings, photography and sculpture) to the more esoteric (dream catchers, jewelry, scarves, even a peppermill!) Poets Ruth Moose, Bonnie Korta, and Sheridan Bushnell couldn’t attend but other poets happily read their work so their voices could also be heard.

If you missed the event, no worries! There’s still time to order a limited edition copy of the poems and images of the art that inspired them for just $35. To do so, contact Mariah at mariah.joyfuljewel@gmail.com. Need a special gift for Mother’s Day? Stop by the Joyful Jewel today — there’s something for every woman in your life, I promise!

In fact, I just bought a pair of earrings for a friend for a birthday present who told me that she absolutely loves them and will treasure them every day!