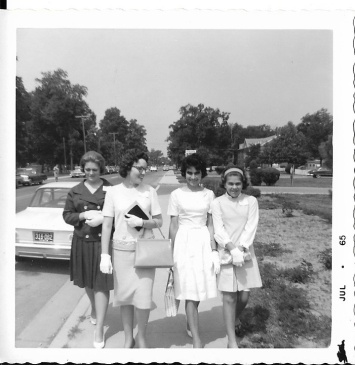 The eldest girl, Sally, had been an easy victory. When Deirdre caught sight of the Bible in her tote bag, right as Sally was leaving the IGA, she invited her to Youth Night at Revival that very same evening. “I’ve got two younger sisters,” said Sally. “Is it okay if they come too?”

Of course it was. But as soon as Deirdre met the middle girl, Anne Marie, who at 15 had a savage self-confidence and rather mature beauty, she knew she would bring trouble.

She behaved herself during the service, even the prayers, Deirdre observed, peeping through the steeple of her fingers. But who knew what she was thinking?

At the end of the night, instead of walking home with her family, Anne Marie immediately sidled up to Doodle Hayes, a farmer’s son with a tendency to hunch his fingers into the pockets of his jeans and teeter on his heels whenever Deirdre spoke to him. And now he teetered next to Anne Marie.

What fun you can have from photographs, especially when you have no idea who the people are or where they’re from! This gives you the freedom to truly imagine, and conjure an original plot from the simplest of details. And because it’s flash fiction, you have to keep it short, less than 750 words, which helps you pare it down to the absolute essentials. I actually wrote 364 words in my first draft and ended up cutting it in half. Honestly, I think it’s better now!

For even more fun, stay tuned for more prompts, and of course, more details on future workshops I’ll be leading at Central Carolina Community College in Pittsboro in Fall 2018.