Yesterday while making reservations for a tour of Steepletop, home of the poet Edna St. Vincent Millay in Austerlitz, NY, the tour director, Martha Rafterty told us to be prepared to be blown away. And we were not disappointed. The home and gardens are simply exquisite, the perfect homage to the life of this free-spirited and talented woman.

Millay, known as “Vincent” to her friends, earned a Pulitzer Prize for her work and was most known for her 1912 poem “Renascence.” In the twenties, she earned as much as $800 for her readings and frequently travelled the world until her untimely and mysterious death in 1949. Afterwards, her sister Norma moved into Steepletop and kept the estate intact, preserving items such as her clothes, furniture and books. Even today the gardens remain authentic, featuring blueberries, peonies, lupine, and her trademark strawberry shrub, the subject of another beloved poem.

As hard as it was to leave Steepletop, we kept to our itinerary and travelled to Pittsfield, Massachusetts and Arrowhead, the home of Herman Melville, most known for his epic novel, Moby Dick. His literary fame was mostly posthumous, however, being more popular in his lifetime for real-life adventures among the cannibals of the South Pacific. 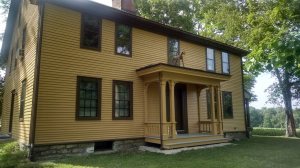 Arrowhead marked the height of his literary output, the location where he finalized Moby Dick and other novels and short stories, one of which, Billy Budd, remained unfinished at the time of his death. Although plagued by insecurities and alcoholism at the end, his granddaughter Eleanor became his literary executrix and thanks to her perseverance, Moby Dick finally received the recognition it deserved.

Although little original furniture remains, the estate includes the fireplace, which is inscribed with Melville’s writings and the study where he secluded himself to write and escape the mayhem of his four children. Arrowhead overlooks a whale-shaped mountain in the Berkshires (Mt. Greylock), which reputedly inspired Moby Dick.

The adventures continue tomorrow with a short drive to Lenox, home of The Mount, the extraordinary estate of Edith Wharton, famous novelist and interior decorator. Stay tuned!