Today was the first day of a much anticipated American Literary Tour through New England. My friends Jen and Ann and I kicked off an eight-day blitz through some of the famous sites of American Literature.

We began by stopping in Richmond, home of the Edgar Allen Poe Museum. Although Poe never lived here, it is the oldest building in Richmond, constructed entirely of stone. He spent some of the happiest years of his life in Richmond and considered himself more of a Southerner than a Bostonian, although he was born there. 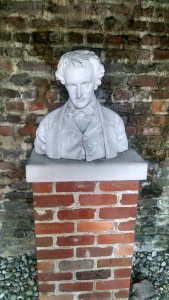 The museum featured personal possessions of Poe, including one of the few extant handwritten poems to a childhood girlfriend, “To Helen”; a trinket box owned by his wife, Virginia; his trunk; and even a lock of his hair. None of the houses where he lived while in Richmond still exist, but the museum features several pieces of furniture, including his boyhood bed, pictured below. 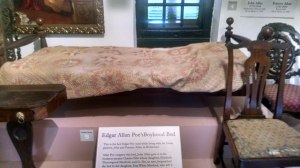 Next, we went to Potters Mill, Pennsylvania, the location of Eutaw House, a tavern built in 1794 and reputedly the site where Poe penned his most famous work, The Raven. Today Eutaw House is home to a used car lot and has been made into apartments. We feared it was inaccessible but the adventurous Ann (at her most brazen) charged through the lawn, unlatched the gate, and climbed up the steps to the third floor. The picture below shows the room where he allegedly wrote this poem. Inside you could sense the ambience that inspired his poem.

“And the Raven, never flitting, still is sitting, still is sitting
On the pallid bust of Pallas just above my chamber door;
And his eyes have all the seeming of a demon’s that is dreaming,
And the lamp-light o’er him streaming throws his shadow on the floor;
And my soul from out that shadow that lies floating on the floor
Shall be lifted—nevermore!”
After polishing off a couple Amish Whoopie pies, we journeyed to State College, where Jen’s parents Janet and Scott live. They are kindly hosting the first and last night of our tour and treated us to wine and a homemade pizza buffet.

Tomorrow we plan to get up at the crack of dawn and travel to Austerlitz, New York, and the home of poet Edna St. Vincent Millay. Stay tuned for the next edition of our journal, which will feature highlights of our journey. In addition to stops in New York, we’ll go to Massachusetts and Connecticut.
Advertisement

One thought on “Summer Literary Tour of New England: Day 1”